There is a place on Earth where you can satisfy your most demanding visual, taste and riding senses. Be a part of a love story between the only country with LOVE in its name and a region more charming than Provence and Tuscany combined – Slovenia and Istria.

Your part of the story starts in the capital of Slovenia, the only capital in Central Europe to be awarded the European Green Capital award. But we won’t let you fall in love too fast, as we’ll take you quickly to peninsula of Istria for a few days. Istria is the westernmost county of Croatia separated by mountains from mainland, making it almost a country on its own.

Inland of Istria recalls an old painting, as rolling hills overlook the fields and valleys with little towns perched on the peaks. And all around is the blue Mediterranean Sea, a feast for your eyes. Known for world class olive oil, wine, pasta, white truffles and Michelin Guide restaurants, Istria also offers upscale Adriatic dining at its very best.

Enchanted from fairytale towns of Istria and with taste buds on high alert, we return to Slovenia, the first country in the world to be declared a Green Destination by Global Sustainable Tourism Council.

Due to its geographic location, Slovenia connects four different worlds, which is also reflected in its gastronomy. Both traditional and haute cuisine put much emphasis on high-quality, locally-produced ingredients, which provide a fullness of flavours. Diversity, creativity and commitment to the principle ‘from the garden to the table’ have been increasingly placing Slovenia on the European gastronomic map. All this has resulted in Slovenia being awarded the title European Region of Gastronomy 2021.

As local experts, Clutch team will take you for an unforgettable dining experience, ranging from tiny home-cooked meal restaurants to lavish high-end restaurants that fuse modern and traditional techniques.

Between gourmet pleasures, we’ll stop by UNESCO World Heritage sights, traverse alpine mountain passes and give your Ducati a taste of tight corners as well. It’s a boutique journey that ends your search for perfection. It’s a love story between great roads, sights and cuisine, a love story between you, Slovenia and Istria.

TOUR AT A GLANCE

ACCOMMODATION: 4*and 5*, best in the area 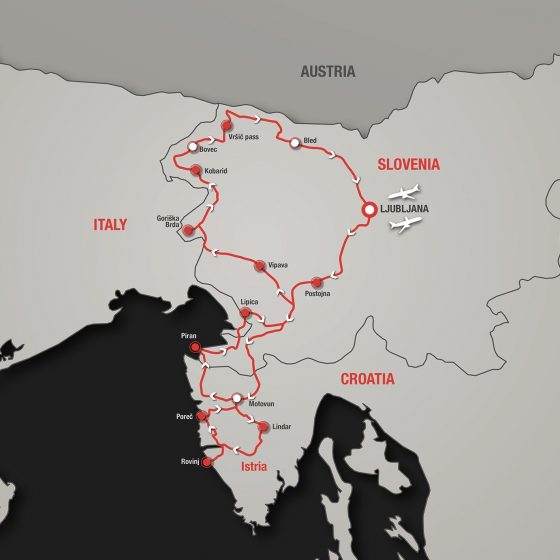